The very beautiful and fashionable actress Aanushka Ramesh, best known for playing Sona in the 2016 Punjabi film Canada Di Flight, recently walked the ramp at the DubaiFashion Week. When asked about it, she said, “My experience at Dubai Fashion Week was fantastic! I had started out my career with modeling and done ramp shows around two years back, but I was super excited because it was my debut on the international ramp, and not just as a model this time but as the showstopper of the evening.”

Revealing more about her experience, she said, “The crazy thing was that I actually met some of the models I had walked with earlier as they were part of this show! Being on an international platform, where so many celebrities, designers, and models get together and walking in front of such a multi-racial audience was a total high! Besides, the kind of response we got was just overwhelming. Ours actually turned out to be one of the best shows and the audience was literally clapping and cheering non-stop when we were on the ramp.” Talking about the designer she worked for, Aanushka reveals, “I walked for designer Sanaa Khan. I represent her brand and I’m the brand ambassador for her label as well. Her collection was really beautiful; it was an Indian wear collection, with beautiful embroidery and royal colors. The outfit I wore was so gorgeous, it literally weighed a ton! But as I was getting ready, all the people backstage were oohing and aahing and said I literally looked like a princess! In fact, they did not even believe I was Indian! The whole atmosphere was electrifying and buzzing with energy and it was truly one of my most memorable experiences.”

The pretty and talented diva ended up having a gala time and bonded a lot with the crew at the fashion week. As a parting note, she shared, “I would like to add that it was an awesome experience working with the entire team of Dubai Fashion League. The makeup and hair team were so amazing, one of the best I’ve worked with. And it was amazing to be a part of a fashion week where some of the top designers were showcasing their collections and to get the kind of recognition and appreciation we got. The best part was that everyone became like one big family, partying and hanging out after the shows! Huge thanks to all the organizers at Masterpiece Events and Dubai fashion league for all their efforts and this lovely experience.”

Tryst the grace by immersing in Victorian Affair with Anaqa Jewels This exquisite festive ensemble is all about detailed Gota embroidery on saturated tones.It is funky,very easy to wear and can be your go to outfit for any festive occasion. The brand motive of Kiehl’s vision is the ‘try before you buy’ initiative. Allowing their patrons to try products before they purchase, this 92-year old initiative has won hearts and has led to loyal clientele over the years.

Kiehl’s journey from humble beginnings in 1851 as an old apothecary in New York’s East Village neighbourhood to 250 stores around the world including 13 flagship stores in India is one which deserves attention and applause.

The event was honoured by Kiehl’s advocate and Bollywood actor Jim Sarbh. He was present at this celebratory occasion and talked with the media about his journey with Kiehl’s India and his favourites from the brand.

Kiehl’s old-world, customer-centric heritage has been at the heart of every product and service debut over the company’s 169-year history – from ingredient research and formula safety testing to localized store decors.

One goal is always front of mind: to serve patrons in an attentive, educational environment that offers the company’s tried-and-true skincare products enjoyed by customers the world over. ‘Utpala’ is a summer collection inspired by the serene lotus. The beauty of this ethereal flower is reinterpreted by the designer into an abstract work of art. The Utpala Collection flaunts a colour palette that is directly derived from the real essence of the flower and its surroundings

Each piece in the collection is crafted with a reverence for traditional artistry and showcases elements such as hand zardozi embroidery, thread embellishments and appliqué. The collection also features hand-painted prints in captivating colours of purple, pink, yellow and green. Bringing sheen and richness to the collection are silks, organzas, chiffons and tulle in flamboyant flares and layers 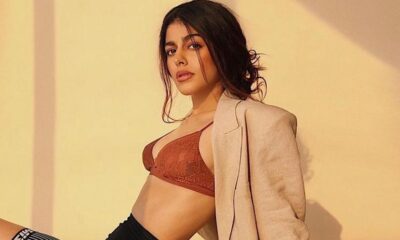